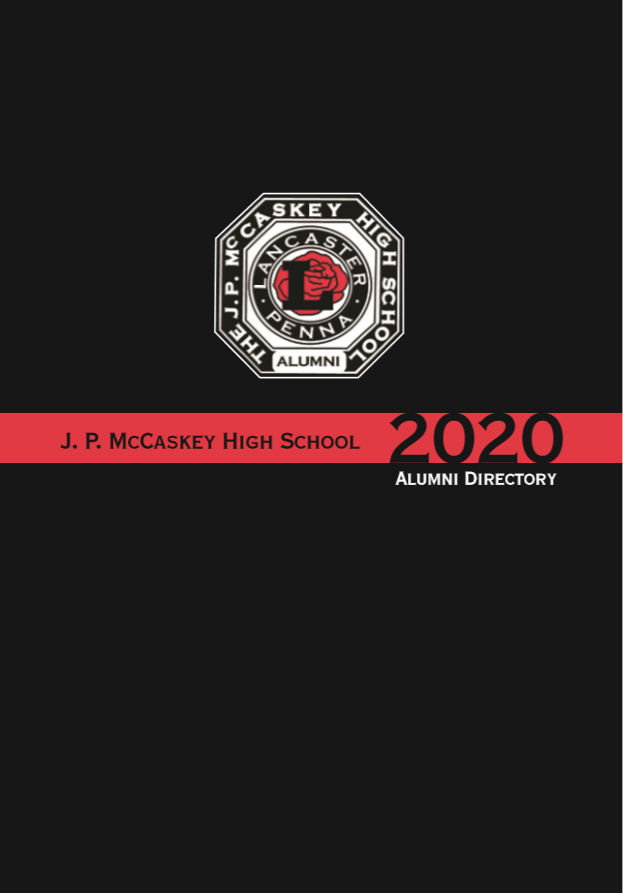 This July, Publishing Concepts, Inc. completed an information gathering and marketing effort and has begun to design the layout for McCaskey’s 2020 Alumni Directory. It does so using photographs and historical information provided by the McCaskey Alumni Association.
At the end of 2019, the Alumni Association joined forces with PCI to bring an up-to-date Alumni Directory to McCaskey graduates. This will be the fifth directory published by the Alumni Association and PCI (formerly known as Harris Connect), which produced directories in 1996, 2001, 2006, and 2011.
In addition to serving as a comprehensive directory of all McCaskey alumni who updated their addresses, phone numbers, and emails, the 2020 Alumni Directory will include several interesting supplements in its introduction, including a complete history of McCaskey High School, as well as a history of its Alumni Association and partner organization, the Lancaster Education Foundation. These supplements have been pieced together with the research of numerous people who helped to tell the McCaskey story over the years, including Robert W. Broome (1913-1993). A longtime SDOL educator and school board member, Broome wrote an article, “The Past is Prologue,” which covered much of the first 50 years of the high school’s history. For this latest book, Broome’s research has been built upon by some of the important events that impacted the McCaskey Campus over the last 30 years, including a visit from Nobel Laureate Malala Yousafzai in 2017.
If you have not purchased your copy of McCaskey’s 2020 Alumni Directory, you can do so by contacting PCI’s Client Experience team at clientservice@publishingconcepts.com or 1.800.982.1590.
As part of this week’s blog post, we share with you an excerpt from the McCaskey history section of the 2020 Alumni Directory:
By the second decade of the 21st Century, a number of important changes occurred on the McCaskey Campus. In March of 2013, the School District of Lancaster approved the implementation of an Air Force JROTC program at McCaskey East. Up to 180 student cadets would have the opportunity to be instructed by retired Air Force officers in a curriculum focused on leadership and aerospace science. In the fall of that same year, McCaskey Social Studies teacher Gabriel Painton introduced Hooverville, which has become a highly anticipated annual event in which students set up tents on Victory Field to simulate homelessness, learn about the hoovervilles of the Great Depression, and hear lectures from local leaders combatting poverty and food insecurity. The following April, the Washington Post ranked J.P. McCaskey High School among the 20 most rigorous high schools in Pennsylvania on their list of “America’s Most Challenging High Schools.” The Post based this ranking on the high number of McCaskey students who attempted college-level exams. McCaskey was the only school in Lancaster County to make the list.
As the McCaskey Campus continued toward the end of the decade, history was made on a couple of fronts. On Tuesday, April 11, 2017 the McCaskey Campus had a surprise visit from perhaps the most globally influential person ever to appear at the high school: the youngest winner of the Nobel Peace Prize, Malala Yousafzai. Drawn by the reputation of Lancaster City and its high school for diversity and the warm acceptance of refugees, Yousafzai told the crowd of 1,000 McCaskey students and community members, “I want to thank your school for being such a wonderful and amazing school.” Throughout the event, Yousafzai praised the “beauty” of the McCaskey Campus’s diversity. “It is an opportunity for you to learn,” she said, “because when you meet people from different communities, from different cultures, it broadens your mind, it expands your vision.” Following her talk, she took several questions from McCaskey students about how they could help her mission to ensure education for girls around the world. In keeping with Yousafzai’s vision for young women, McCaskey Athletics made history three years later, in March of 2020, by becoming the first school in Pennsylvania to start an all-girls wrestling team.
That same March, the danger of the global Covid-19 pandemic had begun to be felt in Pennsylvania. On Thursday, March 12, students went to school as if it were any other day, not knowing that it would be the last day of school for the year, and, for seniors, the last day of high school. The next day, Governor Tom Wolf announced that schools would be closed for two weeks. Before the end of those two weeks, the school closure was extended by another two weeks. Finally, on April 9, Wolf announced the cancellation of Pennsylvania schools for the remainder of the academic year. Among the losses felt at McCaskey was the cancellation of the spring musical, The Addams Family, which had been scheduled to open on March 19. McCaskey students continued their studies remotely from home.
The J.P. McCaskey High School Campus celebrated its 86th commencement virtually on Saturday, June 13, at noon. The ceremony, including live and pre-recorded elements was broadcast on WGAL-TV, Channel 8, and simulcast on Facebook, YouTube and UStream. In the final speech of the program, Associate Principal Luis Diaz told the Class of 2020: Recently we’ve all been thrown into a circumstance that, quite frankly, reminds me a lot of church . . . You are oftentimes told that church is not about the brick and the mortar, and the doors, and the windows, and the rooftop . . . but instead, it is the people that come together under one cause—a cause that steers you to make decisions based on your passions and priorities. These passions and priorities will then lead you to assume roles amongst the people that you surround yourself with . . . The changes you will make will affect the people around you and, in turn, become your individual successes, but more importantly, humanity’s successes . . . And when you run into challenges, and you will, always know we here at J.P. McCaskey High School are here for you. You will not be alone. You have never been alone. Then Mr. Diaz asked those watching from home to stand up and put their hand in the air: “Repeat after me,” he said. “I am a McCaskey graduate. Once a Tornado, always a Tornado.”