Home | Notes from the Alumni Center | A New Year’s Gift 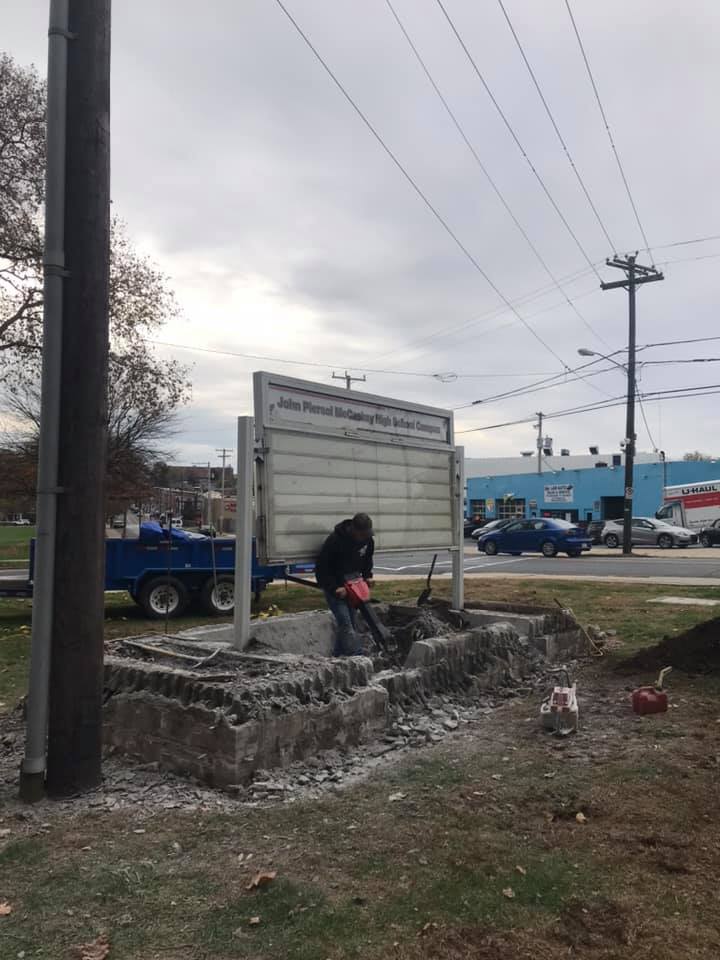 The recent demolition, making way for a new digital marquee

Early next year the new digital marquee sponsored by the McCaskey Alumni Association will be installed at the corner of N. Reservoir St. and N. Franklin St. in front of J.P. McCaskey High School. It replaces the changeable reader board that was put up in the spring of 1978.

“It was a big deal when it was installed, I remember,” said Kimberly Ackerman Worley ’87. “I was 9. I walked by it every day to and from Wickersham, Lincoln, and JPM.”

In the more than 40 years of its existence, the reader board always presented a big job for those tasked with changing the letters. Thomas Goodhart ’80, now the equipment manager for the McCaskey football team, remembers it well.

That system, according to Goodhart, lasted until the late 80s or early 90s when magnetic letters and a clear cover were introduced to prevent the letters from being exposed to the elements or blowing away.

Matt Watson, who has served as McCaskey’s Coordinator of Media and Technical Production for the last 11 years always had a large cart stacked with magnetic letters taking up space in his office.

“In the spring and fall months, it was a nice little break to go out there and change everything,” Watson says, “but the winter months, they were definitely the worst—when the magnets would be frozen to the board.”

In recent years, some have approached the McCaskey Alumni Association about the need to replace the weather-worn marquee, including two of its most loyal supporters, Ron and Jo Stokes.

The Stokes met at McCaskey in the mid-1950s when Ron was a senior and Jo a sophomore. Ron took the vocational training he gained at McCaskey and began a career at the Hamilton Watch Company. Jo returned to McCaskey where she taught math for 30 years.

When the Stokes retired, there was no end in sight to their engagement with McCaskey. They were integral to the formation of the McCaskey Alumni Association, with Ron serving on its board, (which he does to this day), and Jo helping to establish the Museum School at Carter & MacRae Elementary School which, a quarter century later, is giving 2nd and 3rd graders a field trip back in time to the 19th Century one-room schoolhouse. 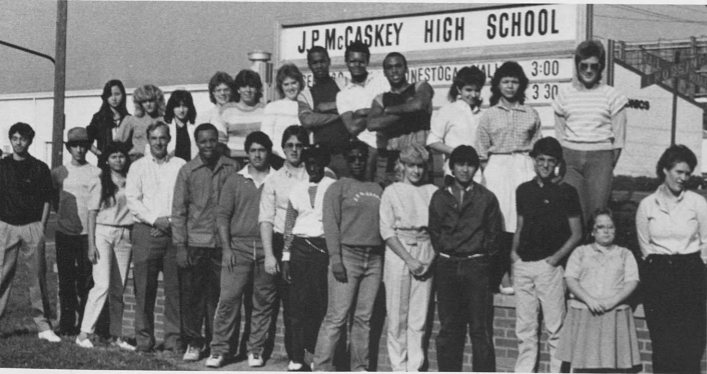 The old marquee, pictured in the 1985 yearbook

Over the years, Ron and Jo have been among the most committed volunteers to the Alumni Association, not just showing up, but taking on the heavy lifting and coordination of countless Distinguished Alumni Banquets, Alumni Basketball Games, and 50th Anniversary Graduation Celebrations.

As Ron recently observed, “Conestoga Valley, Lititz Area Mennonite School District, and Pequea Valley all for sure have the digital signs.”

Wanting the same for McCaskey, Ron and Jo stepped forward to fund the new digital marquee, which will soon be the new fresh face of their Alma Mater.

Their generosity has enabled the school district to install not only Ron and Jo’s replacement marquee, but also two additional digital marquees, strategically placed to draw worthy attention to McCaskey East and the McCaskey Campus as a whole. At the Stokes’ request, the J.P. marquee will include a footer identifying it as a gift given by the McCaskey Alumni Association. For this generous pledge and their remarkable careers of service to McCaskey, they were presented with the Susan J. Garofola Service Award at the 2018 Distinguished Alumni Awards.

The Stokes have made Matt Watson’s life easier.

“Now it’s going to be streamlined,” Watson says. “It’s an online software. We can log in from any of the schools and we can change what the sign says. We’ll be able to schedule messages to go out.”

Unable to let “old acquaintance be forgot,” the McCaskey Alumni Association remembers fondly the old marquee that, for four decades, welcomed students back from summer vacation and announced every school event. Meanwhile, the new marquee bodes for a very happy New Year.