The Simple Story of the Clock

The Simple Story of the Clock 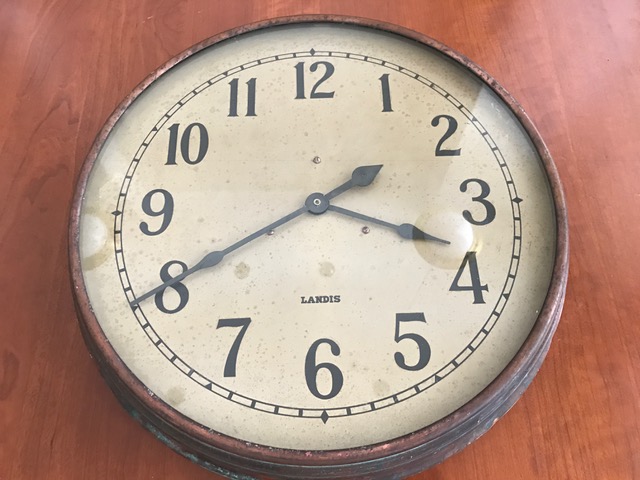 Near the end of the school year in 1996, the Alumni Center received notice that there would be a year-long renovation of J.P. McCaskey High School beginning when school let out for the summer.  All McCaskey students and staff would spend the next school year at McCaskey East High School or a satellite site. Sherma Woolstenhulme, then Alumni Director, and my fellow member of the Class of 1967, began packing up everything in the Alumni Center for storage.

She looked up at the old “Landis” clock high on the wall. It was presumably the original clock from that room, which was the McCaskey High School Library from 1938 to 1974. She was concerned that the clock would be discarded during the renovation.

I happened to be in the Alumni Center one day when she was debating what to do with the clock.  She did not want to put it in a box that might be inadvertently thrown out and with it, lost memories of “old J.P.” I offered to take the clock home and store it for a year in my attic. Sherma thought this was a good idea.

So I took the clock home and stored it… And forgot about it.

Two years later, I was searching for something else in my attic when I rediscovered the clock. Sherma had apparently forgotten about it as well.

I returned the clock to Sherma. By now it was 60 years old, with the dirt to prove it, and we determined that the Alumni Association storage closet on the other side of the McCaskey building would be a more appropriate place for it than the newly renovated Alumni Center.

It remained in the storage closet for 20 years, until Jeremiah Miller ’00, the present Coordinator of Alumni Affairs, recently discovered it.

Our Class of ’67 had a great time at the 50th Anniversary Graduation Celebration in June, in which we were honored alongside the graduating Class of 2017. We asked Jeremiah and his Administrative Assistant Kathy Arnold ’67 (another classmate of mine) what kind of gift we could offer to show our appreciation for the work the McCaskey Alumni Association did to facilitate this event.  Knowing that the Alumni Center was without a working clock, Jeremiah showed me the antique he had just discovered.

Neither Jeremiah nor Kathy knew the history of the clock when they asked if I would take it to a repair shop, and if the Class of 1967 would have it restored. When I told them the story of how Sherma had saved the clock from being thrown away, and how it had spent two years in my home, they suggested that the restoration of the clock would both fill a need in the Alumni Center and offer an interesting topic of conversation. Our Class of ’67 gladly chose to fulfill their wishes.

The original clock has been restored as a gift from the Class of ’67 to the McCaskey Alumni Association.   It is now keeping time in the Alumni Center as a symbol of the original J.P. McCaskey High School building, opened in 1938.