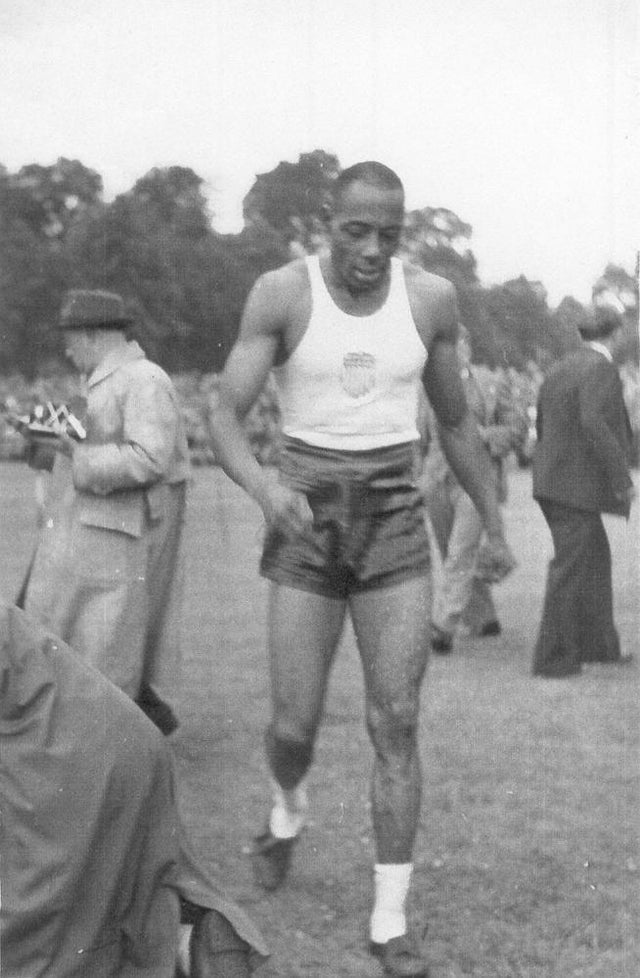 25 years after his death, we still hear first-hand recollections of Lancastrian and Olympic sprinting champion Barney Ewell ’38. A full-page newspaper article, published on December 27, celebrates Ewell with such remembrances.
“My pals and I were very excited,” said Bill Taylor to the article’s author. “We were told the world’s fastest man was coming to run.” Taylor was 11 years old when he saw Ewell sprinting on the track of an athletic field. “He was going so fast they had to open the gate at the other end to give him room to slow down.”
“Watching him definitely inspired me to become an athlete,” said John Steede, who was eight years old when he saw Ewell in action.
When Lancaster City announced its intent to rename Lancaster Square, the Barney Ewell Legacy Committee launched a successful campaign to make Ewell Plaza its new name. Ewell’s influence had reached across the globe, we pointed out, while his hometown spirit inspired the young and brought people together.
The accounts of Bill Taylor, John Steede, and others in the aforementioned December 27 article are perhaps the most salient reminder of Ewell’s global footprint and gregarious personality in many years, not least because they (and the article’s author, Jack Davidson) are from thousands of miles across the Atlantic Ocean.
Davidson’s full-page salute to Ewell appeared in Scotland’s equivalent of USA Today, the Scotsman. Bannered over an oblong image of Ewell crossing a finish line and a vertical portrait of the sprinter in his sleeveless Team USA shirt, is the article’s title, “Remembering Barney Ewell, the Uncrowned King of Bathgate.”
Scottish writer Jack Davidson sheds much light on a largely forgotten chapter of Ewell’s life: the summer of 1950 when he ran professionally in the Scottish Border Games.
“During that period,” Davidson writes, “his presence injected considerable interest and a degree of exoticism in the Games while serving up unforgettable highlights as he sped spectacularly to the finishing tape…”.
Ewell was still in excellent form at age 32, the article reveals. He ran a 100-yard dash “in a blistering 9.7 seconds.” He broke a British record for the 120-yard handicap sprint, running it in 11.37 seconds. The crowd gasped.
Davidson captures the unique impression Ewell had on this particular time and place.
“None of us had seen a black man before,” said Taylor, who had witnessed Ewell sprint out of the football (soccer) field and would grow up to be a respected goalkeeper.
Davidson recounts the six-hour detainment Ewell was put through upon landing in Scotland without a work permit. “I’m here to run, not work,” he quipped to the officials. When he returned to the airport two months later for his departing flight back to the U.S., it was delayed an entire day. “I could hardly get into this country, now I can hardly get out!” he remarked with a grin.
These airport layovers are symbolic of a life characterized by barriers and the lighthearted disposition that always broke through them.
As Davidson reports, the first Black man that many Scots had ever seen was “popular with all”. His races attracted record numbers of spectators— once as many as 11,000.
“He was loved by the crowd,” remembers Steede, the young man whom Ewell inspired to become an athlete, and who indeed grew up to become the British professional 440-yard champion. “(He) mingled with them later, happily signing autographs,”.
“His friendly outgoing demeanor endeared him to all,” Davidson writes, “especially local children . . . (Ewell) encouraged youngsters in sport and gave of his time to visit patients in Bangour hospital.”
The article’s reverence for Ewell is so strong that it ends in melancholy:
“The chances of history repeating itself and a 21st century version of Barney descending on Bathgate 70 years later to light up the country are non existent.”
Nobody will ever see Ewell in action again. With the help of the Lancaster community, the Barney Ewell Legacy Committee is aiming for the next best thing: a bronze statue depicting the world class sprinter in the plaza that bears his name. A Pennsylvania artist will be commissioned to produce this sculpture, which will be dedicated in 2022. Anyone willing to donate to this project can send contributions designated to the “Barney Ewell Statue” to the McCaskey Alumni Association, 445 N. Reservoir St. Lancaster, PA 17602.
Ewell’s memory abounds in Scotland 70 years after his visit. Set in bronze in his home city, it can inspire countless new generations. Whether or not they follow him into sport, Barney Ewell brings out the uncrowned king or queen in all his neighbors, from all walks of life and corners of the earth.
Lancaster might even see a rise in Scottish tourists.