Zimmerman’s Restaurant and the Myers Kids

Zimmerman’s Restaurant and the Myers Kids

In 1952, my mother, Helen Myers, age 38, who was the primary breadwinner for our family as far back as I can remember, was the parent of five children: my sister Lydia, 18; brother Carl, 8; me (Scott), 5; sister Heather, 2; and brother Donnovan, less than a year old; with yet another sister, Daisy, to be born in 1954. She, my father, and we kids lived in Sunnyside at that time. We would move to 709 S. Queen Street in 1955 – five kids still at home as the oldest, sister Lydia, had moved out and married. New sister Daisy took her place at the dinner table.

Back to the year 1952: Right before my mother began her 27-year career at the RCA plant on New Holland Avenue, she was a waitress (deemed an appropriate job title back then) at Wiggins Restaurant at 141 N. Queen Street. The restaurant manager was Earl Zimmerman. It was fortunate for our family that Helen had gained employment with RCA because in July of 1952 Wiggins Restaurant closed.  Earl Zimmerman moved on to manage the lunch counter at the nearby Miller Drugstore at 56 N. Queen Street.

In 1959, because of my mother’s successful earlier employment relationship with Mr. Zimmerman, Carl, age 15 at the time, was hired as a dishwasher at Miller Drugstore, working in the basement for the exorbitant rate of 40 cents per hour.  And so it was that he became the first of five Myers siblings to work for “Mr. Z”.  As there was no car in our household, it was fortunate that the restaurant was less than a mile from our house which made commuting on foot no problem.

Carl’s hiring directly affected me as I, then age 13, immediately inherited his Intelligencer Journal morning paper route that spanned from the 400 block of S. Prince Street to Buchmiller Park.

A year later, in May of 1960, Earl opened Zimmerman’s Restaurant at the Southwest corner of North Queen and West Orange Streets (66 N. Queen St.). Carl tagged along with Mr. Z. to become a dishwasher at the new restaurant, maintaining his 40 cents per hour rate, but moving from the basement at Miller Drugstore to the second floor where the kitchen of Zimmerman’s Restaurant was located.

Carl was somewhat of a prankster. Next to his dish station, there were windows with a view to the north on West Orange Street and directly across the street was the YMCA. The view included a phone booth and bus stop right outside of the YMCA. Carl obtained the phone number of the phone in the booth. On his breaks, he would sneak away to Mr. Z’s office (also on the second floor with the same window view), and if he noticed anyone standing near the phone booth, he would then call the phone in the phone booth. If the person answered the phone, and they often did, he would then ask them if a certain celebrity was there (e.g. Bob Hope) and to please look for that person in the immediate area. Then he would tell the person that they were on “Candid Camera” and enjoy watching their reaction.

By the fall of 1961, Carl had figured out that there were part-time jobs available that paid more than 40 cents per hour, and he latched on to one as a stock boy at Sanitary Food Market on South Duke Street for the astonishingly high hourly rate of $1. At about that same time, I decided that I had enough of delivering morning newspapers, so I sold my route to neighborhood friend and classmate Timmy Griffiths, McCaskey class of 1964, for the princely sum of $5. Continuing to follow in my brother’s footsteps, I became a dishwasher at Zimmerman’s Restaurant, filling the vacancy that Carl’s departure had created. Mr. Z must have been in good mood the day he hired me because my starting hourly rate was 80 cents!

During my sophomore, junior and senior years of high school (1962-1964), I worked at Zimmerman’s about 20-25 hours per week on Tuesday and Friday nights, Saturday afternoons and evenings, and Sunday morning. The restaurant was closed on Sundays, so my job was to pick up the wooden slats behind the counter, carry them outside to put up against the wall on the West Orange Street side of the building, and hose them down to get rid of all the grease and whatever else accumulated during the week in this busy restaurant. I would also buff the restaurant floor. I was often the only person in the restaurant on Sundays, so I would take great pleasure in eating all the remaining slices of pecan pie in the pie case. This was the only day of the week I worked in the restaurant area, when there were no customers. Like Carl, I never made it out of the upstairs kitchen to a customer-facing job in front of the hungry patrons.

Earl and his wife Marguerite had a son named Earl Jr. who was three years behind me in school. As a ninth grader he was struggling with math, so I, now a senior, was hired to tutor Earl Jr. one hour per week for the astronomical stipend of $3.  On Wednesday nights Marguerite, accompanied by Earl Jr., would pick me up from my home in her Thunderbird (Mr. Z did not drive) and take me to their home in Media Heights to tutor Earl Jr., and then transport me back home. It was a good deal for me! Hopefully Earl Jr. benefitted from the tutoring.

A highlight of my time at Zimmerman’s was that it was a key component of my very first date – April 18, 1964 – just barely before my high school graduation, which occurred less than two months later. My date was Marilyn Long, who worked as a waitress at the restaurant. As I had no car, we agreed to meet at the restaurant and then walk just one block north on North Queen Street to the Boyd Theater where we watched the movie “Tom Jones”.  Because I worked on Sundays, I had a key to the restaurant. So, after the movie, we walked back to the closed restaurant, went in and enjoyed a soda as our nightcap.  Marilyn was kind enough to drive me home after the date.

Heather’s and Donnovan’s tenure at Z’s overlapped during the 1966-1970 timeframe. Heather worked as a waitress (the first Myers kid to get a customer-facing job!) making about 60 cents per hour plus tips. Heather did well with tips because she was a very good waitress with an outgoing, friendly personality. Donnovan started as a dishwasher at 85 cents per hour, and then advanced to a busboy at $1.25 per hour. Donnovan also did some post-high school work for Mr. Z as a painter at $2 per hour.

Donnovan, like his two older brothers, delivered newspapers – he had a Lancaster New Era evening route that included his own home – very convenient.  He started the route in 1964 at age 12 and it was quite lucrative – $30 per week, so he did not give it up when he went to work for Zimmerman’s Restaurant. He also made money as a caddy at Meadia Heights Golf Club, especially during the summer. I benefitted directly from Donnovan’s prosperity because in 1968 I took a spring break trip to Florida to visit our oldest sister, Lydia, and borrowed $100 from him to help cover traveling expenses.

Donnovan’s good friend, Bobby Zook, McCaskey class of 1970, also worked at Zimmerman’s during the 1966-1970 years. On Sundays they would clean the walls in the restaurant with soap and water which took about five hours. One day our mother Helen suggested that they use Pledge instead of soap and water. They took her suggestion and reduced the cleaning time from five hours to one hour, but continued to be paid for five hours as they did not inform Mr. Z. of this huge productivity breakthrough.

Bobby lived at 547 South Queen Street, about a block closer to the restaurant than our house at 709 South Queen Street. Sometimes, Heather and Donnovan would walk to work together, and going right by Bobby’s house, he would join them on the walk when they were all working the same shift. A lady that lived along the way would playfully call them the triplets, which irritated Heather greatly because she was over a year older than Bobby and Donnovan. Isn’t it amazing what sets people off when they are young?

Evidence would suggest that Mr. Z took a liking to Donnovan, but, according to Donnovan, an even stronger liking to Bobby, who ultimately progressed from busboy to short-order cook, an opportunity never offered to Donnovan.  Also, Mr. Z. selected Bobby, not Donnovan, to be included in the picture in the 1970 McCaskey Echo yearbook that Zimmerman’s Restaurant sponsored. Nevertheless, Donnovan would sometimes caddy for Mr Z. at Media Heights Golf Course for $10 tips. In early 1970, Mr. Z. took Donnovan and Bobby to Philadelphia to see a Big-5 college basketball game at the Palestra in Philadelphia and put them up in the Bellevue-Stratford Hotel. During that trip, Donnovan and Bobby visited an alumnus of Zimmerman’s, Frank Chesters, who had become a student at University of Pennsylvania. The story goes that Frank, who was a waiter during part of Heather’s tenure at Zimmerman’s, was allegedly sweet on Heather, but Heather had no interest in Frank.

The fifth and final Myers’ kid to work at Zimmerman’s Restaurant was Daisy, from 1970 to 1973.  She started as a busgirl and six months later became a waitress at the counter making 80 cents per hour plus tips. Her regular customers included members of the Hertzler family who owned the nearby Hertzler Shoe Salon at 52 North Queen Street and members of the Shaub family, owners of the nearby Shaub’s Shoe Store at 18 North Queen Street.

With the departure of Daisy from Z’s in 1973, thus ended fourteen years of Myers kids working for Mr. Z. The five of us had a bundle of positive experiences during that time. After our McCaskey days, the five of us went on to achieve four bachelor’s degrees and two master’s degrees, and all of us have stayed out of jail. Thanks to Mom and Mr. Z for making it all possible! 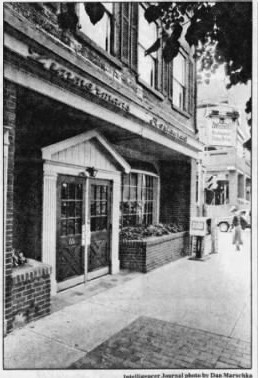