In 1991 the School District of Lancaster embarked on an ambitious plan to prepare the next generation of Lancaster City youth for success. While the middle of the 20th century had seen a workforce populated mostly by unskilled workers, it was noted that by the year 2000, only 15% of jobs would be available to individuals without specialized training. A committee was formed to help usher McCaskey students into the new millennium prepared.

As the year 2000 approached, it was also observed that fewer jobs would require individuals to work independently. High schools needed to begin training students to work well in teams. Therefore, it was decided that the McCaskey Campus would require a new facility—one that was designed around a team concept with state-of-the-art tools.

“There was a need for it,” remembers Carroll “Butch” Staub, a former McCaskey principal. “We needed space. We needed technology. We needed updated classrooms.”

The groundbreaking for the new $28 million high school occurred in 1994, beginning a two-year construction period. Finally, on August 28, 1996, rising senior Esteban Rodriguez, president of the Class of 1997, took a pair of giant scissors to the red and black ribbon that cordoned off the main entrance of McCaskey East. 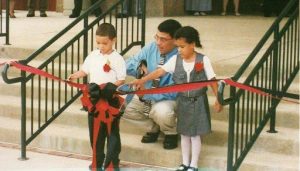 The ribbon-cutting ceremony in 1996, officiated by 1997 Class President Esteban Rodriguez, along with youngsters James Stewart and Chamele Batts.

From September 1996 to June 1997, immediately following its dedication, “East” housed tenth, eleventh and twelfth grade students while J.P. McCaskey High School was undergoing its most recent renovation. Then in September of 1997, it began hosting freshmen and sophomores. For the first time, ninth-graders in the district no longer went to junior high school—now known as middle school. Middle schools now hosted sixth grade, which, in years prior, had been held in the elementary schools.

August of 2021 not only marks the 25th birthday of McCaskey East, but also the anniversary of the beginning of construction on J.P. McCaskey High School, a building, like East, which did not escape public controversy over safety concerns. 85 years after the JPM cornerstone was laid, in defiance of such concerns, both buildings stand as strong symbols of success as the campus continues to keep pace with the times, always seeking, as Superintendent Dr. Damaris Rau has put it, “to ensure that every child graduates high school college or career ready.”

If you appreciate the McCaskey Alumni Association’s work to preserve the history of McCaskey High School, please consider supporting us by becoming a member for only $25 per year.