The McCaskey Alumni Association leads the campus in celebrating the quinquennial (multiples of five) anniversaries of McCaskey High School and the birth of its namesake, John Piersol McCaskey. The forthcoming 2022-2023 school year brings with it Dr. McCaskey’s 185th birthday and the 85th anniversary of McCaskey High School, which opened for classes on February 7, 1938 and was officially dedicated on May 3 of the same year (less than three years after Dr. McCaskey’s death at age 97).

Dr. McCaskey, who was born on October 9, 1837, will be memorialized by the Alumni Association with a public wreath-laying ceremony at his gravesite in Lancaster’s Greenwood Cemetery on Friday, October 7, 2022 at 1 PM. In the spring, on May 3, 2023 at 6:30 PM, the Alumni Association will host an open house at J.P. McCaskey High School celebrating the anniversary of the school’s dedication.

Throughout the year, graduates will be encouraged to “join the 85th birthday party” by making an $85 contribution to the McCaskey Alumni Association. In doing so, donors will further MAA’s mission to preserve the history of Pennsylvania’s second-oldest school district and bring the “McCaskey family” together in service to the next generation through scholarship development and programs of the Lancaster Education Foundation. 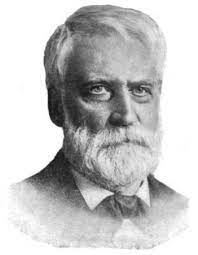 John Piersol McCaskey was born in the Lancaster County town of Gordonville in Leacock Township, near Paradise, and he attended high school in the City of Lancaster at Boys’ High School. Though academically proficient, he withdrew during his senior year, a time of financial distress for his family, and entered the workforce. By the fall of his would-be graduation year, he was back at Lancaster Boys’ High School, beginning 50 years as an educator and administrator (Though education was valued highly, an official record of graduation was not a prerequisite to a teaching career in 1855). He received an honorary doctorate from Franklin & Marshall College in 1887.

Best described as a Renaissance Man, McCaskey dabbled in numerous professions and vocations throughout his long life, including banking, law, journalism, printing, editing, and song publishing. Some well-known songs, including “Row, Row, Row Your Boat” and “Jolly Old St. Nicholas” were printed for the first time ever in his “Franklin Square Song Collection” (He was not the author of “Jolly Old St. Nicholas,” contrary to local legend, but did introduce the song to the world through its publication).

During his career in education, he was instrumental in the hiring of Lancaster Boys’ High’s first woman teacher. He introduced art, astronomy, and music into the city school curriculum and pioneered student celebrations of Arbor Day, resulting in the planting of more than 9,000 trees. He served as Mayor of Lancaster from 1906 to 1910. Among his greatest heroes was Thaddeus Stevens, the U.S. congressman and fighter for racial equality. 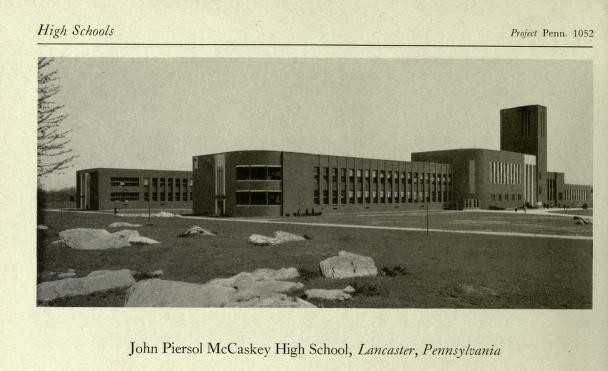 In 1935, before J.P. McCaskey High School was built, renderings of the building, as accurate as any drawn from life, appeared in the Lancaster newspaper. Yet the Art Deco superstructure had no official name. A project of the New Deal, President Franklin Roosevelt’s Depression-era stimulus programs, it became known, perhaps derisively, as the “Million Dollar High School.”

Many tax-paying citizens objected to this expensive new structure, questioning its safety for occupancy. One Lancaster church leader even denounced the project from the pulpit, saying in a sermon that “anxious parents cannot be but worried over what might happen to their children in that building if it is unsafely built.” As a result of the controversy, engineering consultants from outside of Pennsylvania were summoned to Lancaster to investigate the building. They affirmed its safety for occupancy, but the plan to build a trolley line along the street in front of the building was scrapped.

Following Dr. McCaskey’s death in 1935, the school board made the decision, encouraged by a barrage of public requests, to name the new “Million Dollar High School” for Dr. McCaskey.

Construction began in 1936 and the building was completed two years later at a cost of $1.4 Million. J.P. McCaskey High School introduced co-education, bringing boys and girls together under one roof for the first time in the history of the city’s high school.

Nearly 60 years later, J.P. McCaskey High School became a campus, with the addition of a second building, McCaskey East, a structure designed to encourage teamwork and provide the state-of-the-art tools necessary to prepare students for college or trade school. McCaskey East was dedicated in 1996, and, like J.P. before it, would not escape public controversy over safety issues.

26 years later, in defiance of those surmountable issues, the McCaskey Campus has graduated more than 40,000 students, and, within the last decade, has been recognized nationally as one of Pennsylvania’s most academically stringent high schools.

The Last Five Years at McCaskey

The McCaskey Alumni Association has witnessed numerous important moments in the history of the school since the last quinquennial anniversary (five years ago):

Malala Yousafzai’s Visit: On Tuesday, April 11, 2017 the McCaskey Campus had a surprise visit from perhaps the most globally influential person ever to appear at the high school: The youngest winner of the Nobel Peace Prize, Malala Yousafzai. “I want to thank your school,” she told a crowd in the J.P. McCaskey auditorium, “for being such a wonderful and amazing school.”

Covid-19: On Friday, March 13, 2020, as the virus’s threat was beginning to be felt in Pennsylvania, Governor Tom Wolf announced that schools would be closed for two weeks as a precaution. Before the end of those two weeks, as the threat became more real, the school closure was extended by an additional two weeks. Then on April 9, Gov. Wolf announced the cancellation of Pennsylvania schools for the remainder of the academic year. More than ten months after Covid-19 halted in-person classes (the longest moratorium on classroom instruction in the high school’s history), students returned to McCaskey’s classrooms on Monday, January 25, 2021. The return followed the approval by the school board of a plan that continued to offer students virtual learning options.

Trailblazing Girl’s Wrestling Program Begun: On Tuesday, March 17, 2020, in keeping with its mission to achieve diversity and equity, the School District of Lancaster affirmed the proposal of Athletic Director Jon Mitchell to establish the first girl’s wrestling team at a Pennsylvania high school. The former head wrestling coach at McCaskey, Mitchell has been a longtime advocate for girls wrestling, including girls on his teams and spearheading the first Pennsylvania Girls State Wrestling Championships.

Dr. Justin Reese Becomes Campus Principal: The school board voted on March 16, 2021 to appoint Dr. Justin Reese to be McCaskey Campus Principal of McCaskey High School. Dr. Reese is no stranger to McCaskey. He served for five years as an assistant principal, overseeing students and staff of the J.P. building. Now as Campus Principal, he has double duty. The 2013 Pennsylvania Social Studies Teacher of the Year, he holds a master’s degree in at-risk education from Lock Haven University.

Dr. Damaris Rau’s Retirement: At the School Board meeting on Tuesday, January 18, 2022, Superintendent Dr. Damaris Rau announced that she would be retiring in July, concluding a seven-year chapter with SDOL and a 40-year career in education. She led a school district of more than 10,000 students through COVID-19 and what was arguably the most challenging time in history to be a superintendent. She achieved numerous accomplishments for the district, cutting student suspensions in half and introducing technologies for virtual learning and innovative programs supporting students’ social-emotional health. Meanwhile, she oversaw the renovations of two middle schools and the construction of a new elementary school.

The McCaskey Alumni Association remembers this recent history and looks forward with excitement at what the next five years will bring. For now, MAA hopes you might join the 85th Birthday Party by offering a gift of $85 and/or joining them for the 85th Anniversary festivities.

What to Know for John Piersol McCaskey’s 185th Birthday Wreath-Laying: This event will take place on Friday, October 7, 2022 at 1 PM. The location of McCaskey’s resting place is Grave 9 in Lot 216 of the General Reynolds Section of Greenwood Cemetery: 719 Highland Ave., Lancaster, PA. A trail of balloons beginning at the cemetery entrance will help to guide you in your vehicle to the gravesite where you can park along the road. You need not RSVP unless you wish to request a chair (seating is not guaranteed otherwise). Such requests can be made by contacting the McCaskey Alumni Association at (717)399-6418 or jeremiahlmiller@sdlancaster.org.