The dedication festivities for the statue of Olympic sprinting champion and Lancastrian Barney Ewell have been scheduled for the morning and early afternoon of Saturday, November 19 in Ewell Plaza, across from Binns Park on North Queen Street. The Barney Ewell Legacy Committee is working with the City of Lancaster to finalize the details.

The Barney Ewell Legacy Committee (BELC), comprised of Ron Ford (former county commissioner), Art Morris (former mayor), Ken Stoudt (businessman), and Jeremiah Miller (Alumni Director for the McCaskey Alumni Association), will produce a dedication program that will include performances by vocalists and instrumentalists from Mr. Ewell’s Alma Mater, J.P. McCaskey High School. BELC has partnered with the Lancaster Recreation Commission, which will offer physical activities and games for children following the unveiling of the statue.

BELC formed in 2016 to bring a much greater public profile to Henry Norwood “Barney” Ewell (1918-1996), once the “fastest man in the world” and the winner of a gold medal and two silver medals at the 1948 Summer Olympics in London. In 2018, the group hosted Barney Ewell Week, a countywide celebration of Mr. Ewell’s 100th birthday. More recently, they successfully encouraged the City of Lancaster to establish Ewell Plaza in his honor and oversaw the process that resulted in the selection of York County artist Chad Fisher to produce the forthcoming statue of Mr. Ewell.

In the run-up to the statue’s dedication, BELC will petition the United States Olympic Committee to send a representative to the ceremony to honor Mr. Ewell’s family with a traditional Olympic Medal Ceremony, a rite that Mr. Ewell was denied when he was initially disqualified from receiving his gold medal due to a judge’s error.

As they build excitement for the dedication, BELC will be collecting and sharing memories of Mr. Ewell and reflections on his legacy from the community. If you would like to contribute to this effort, please send written or videoed recollections to jeremiahlmiller@sdlancaster.org. Even if your age and/or circumstances prevented you from ever knowing Mr. Ewell, BELC is interested in hearing from individuals of all ages who have been impacted by his remarkable story of resilience. 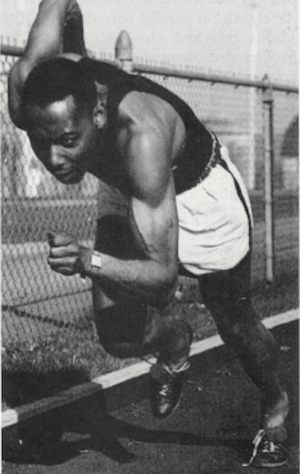