Home | Notes from the Alumni Center | Congratulations, Class of 1971! 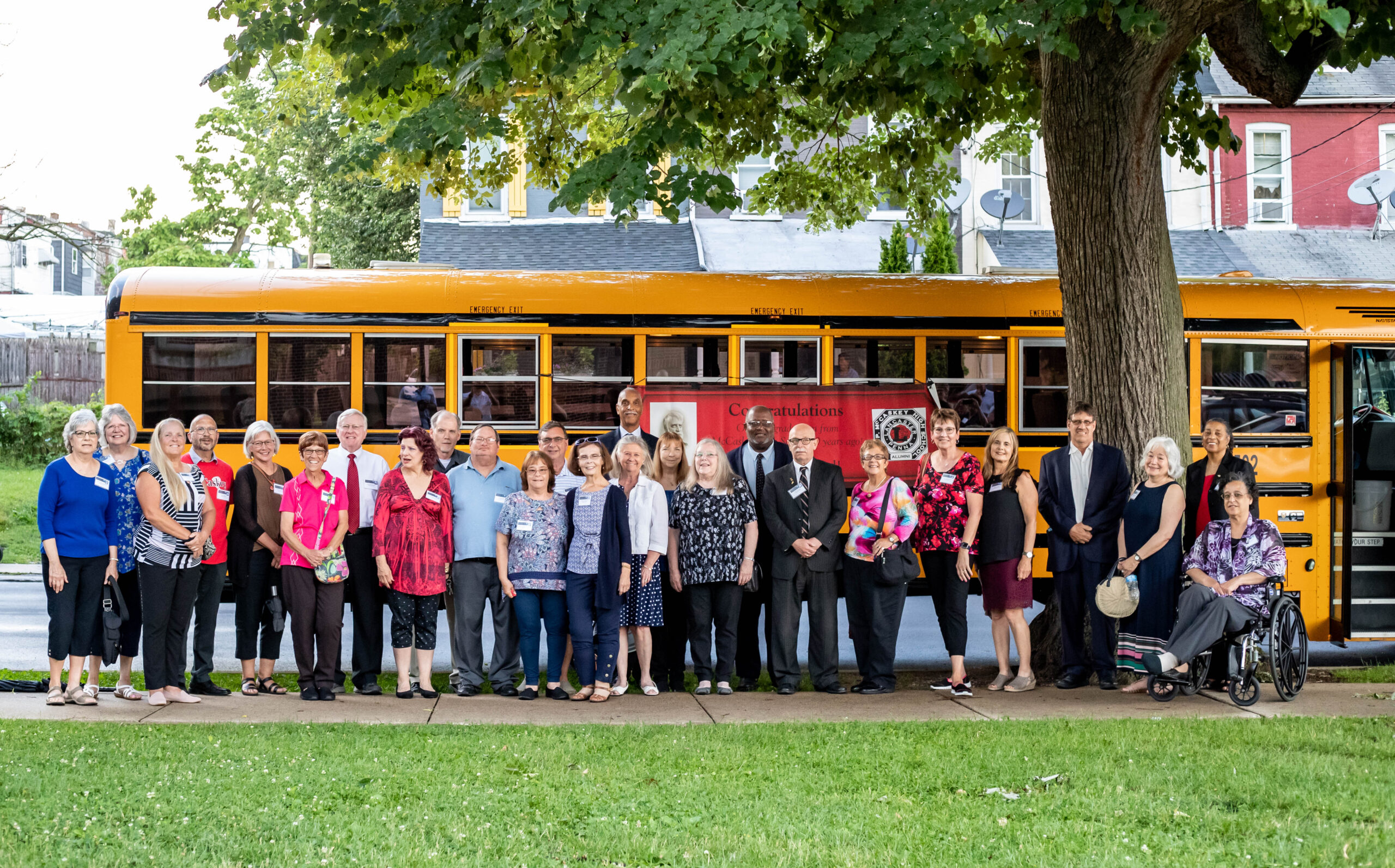 The following address was delivered by Associate Principal Elizabeth Moodie to McCaskey’s 50th Anniversary Class of 1971 at the 2021 J.P. McCaskey High School Commencement, June 9, 2021:
For as far back as is recorded, the city high school of Lancaster has welcomed its 50th Anniversary Class back to the high school to be honored at each year’s Graduation. For keeping this tradition going, I wish to extend a big thank you to the McCaskey Alumni Association and encourage all graduates of this campus to keep in touch by visiting mccaskeyalumni.org and becoming members of this uniquely active high school alumni association.
Covid-19 has necessitated that we hold our Graduation Ceremony outdoors this year. This is an adjustment for most of us, but one reason to smile at this development is that the members of the Class of 1971 who are with us today get to experience even more nostalgia than most 50th anniversary classes do–Because it was here in this stadium that they graduated 50 years ago.
Class of 1971, you entered McCaskey as sophomores in the fall of 1968. During your time at McCaskey, you experienced the discord of the Vietnam War as well as the hopefulness of the first footstep on the moon.
By your senior year, Apollo 14 astronaut Alan Shepard became the fifth person to walk (and the first to golf!) on the lunar surface.
During your senior year, the first Starbucks Coffee opened in Seattle Washington.
National Public Radio (NPR) broadcasted for the first time.
Three Dog Night’s “Joy to the World” topped the music charts.
“Marcus Welby, MD” was the most watched television show.
A McCaskey High School graduate named Franklin Schaffner won the Best Director Academy Award in 1971, and his movie, “Patton” won Best Picture.
In the Fall, the Baltimore Orioles won the World Series over the Cincinnati Reds. In January, another Baltimore team, the Colts, defeated the Dallas Cowboys in the Super Bowl.
Speaking of football, McCaskey’s varsity team fought to a fourth place standing in the Central Penn league. Led by head coach Jack Cassebaum, the Tornadoes finished with an impressive 7-4 record. In the Homecoming Game, the Tornadoes nipped the Reading Knights 14-13. 11,000 fans jammed into this stadium for the annual Thanksgiving Day game against Lancaster-Catholic. McCaskey beat Catholic 30-18 in that year’s game.
On January 15, the McCaskey Marching Band braved 11-degree-below-zero temperatures to perform at Pennsylvania Governor Milton J. Shapp’s inauguration.
Class of 1971, you produced a very memorable fall play called “Auntie Mame” and an equally impressive Spring Musical, “Fiddler on the Roof”. You were the first high school east of the Mississippi River to stage that show!
Your majorettes’ 1971 performance of “Raindrops Keep Falling On My Head” was an all-time favorite among McCaskey fans.
Your newly formed social and environmental action clubs worked to get the cafeteria to move away from using cardboard milk containers and to promote voter registration amid the passage of the 26th Amendment, which gave 18-year-olds the right to vote.
Both in the world and here at home, your high school years were characterized by a transition out of a period of challenge and into one of hope—Just like the times we find ourselves in today. We are so grateful that you could be here with us in person. All of you serve as a reminder that challenges come and go… McCaskey Pride is forever!
McCaskey Class of 1971, congratulations on your 50th Anniversary